Who are the tram opponents?

It is true to say that many people do not want trams, and they are very vocal.

This post on the Evening News website under a story about the second Forth road bridge costing in excess of £1 billion sums up a lot (but not all) of their thinking:

“If a report had come out stating that the proposed trams for Edinburgh were going to cost more than £1 billion, by now there would have been dozens of postings expressing screeching outrage. But so far not a peep. If any proof were needed that the anti-tram brigade are all car drivers who grudge any money being spent on public transport, but don’t mind how many millions are wasted on environmentally damaging roads and bridges, this is it”.

But there is more to it than that.

The anti-tram lobby can be split into two:

There is also another category, that of people who have concerns about some aspects of the proposals, but accept that the greater good outweighs these. For example, Spokes, the cycle campaign, were/are deeply concerned about the loss of cycle facilities on the Roesburn corridor. They are still not that convinced about the replacements. The same applies on Princes Street. However, they are right behind the trams as they see the greater good of improved public transport.

Category 2 (above) are in the majority amongst tram opponents, and usually flatly contradict each other making it very hard to debate with them. For example, some people say that the trams should use the old railway lines (which is a viable option in many places, hence the routes chosen), but then others go mental at the thought of all the badgers that would die.

Some say that trolley buses are a better alternative because they too use electricity, others scream about the fact that trams won’t reduce pollution because, err, they still use electricity.

Some claim to be concerned solely with the cost to the taxpayer, but say absolutely nothing about other grossly-over prices schemes, such as the M74 (each of the 5 miles will costs over £100 million – makes the tram seem a bargain).

And then there is the SNP who were once vocal in supporting trams, and then totally changed their minds. They rubbished things like the guided busways, and now they propose those as alternatives.

And many people even deny there is a congestion problem! In which case there is not even any point having a debate at all.

When the Eiffel Tower was built, the people of Paris were up in arms. There were demonstrations. Can you imagine what would happen now if the mayor of Paris proposed knocking it down? Neither can I!

Politicians have to take difficult and long term decisions based on serious evidence from those who know what they are talking about. Strategic long term transport planning is a professional occupation. The detail of our transport plans should not be dictated by a small vocal minority.

Not everyone can have their own way. Personally, I would have chosen slightly different routes for the tram. But at the end of the day, because my changes were not taken on board, I am not going to throw my toys out of the pram and object to the whole scheme.

Posted in They have no public support, What the SNP say. Leave a Comment »

Chamber of Commerce, businesses in favour

The Chamber of Commerce conducted an online poll amongst its members asking whether they supported the re-introduction of trams. Unsurprisingly, 75% were in favour. Click here for more details.

As ever, just about every survey comes out in favour of trams.

This one comes as no surprise, given that business people live and/or work in Edinburgh, they all have to travel round the city and they all spend a fortune on delays in deliveries etc caused by congestion.

And also ‘cos they have eyes and can see the problem.

We WILL use trams, say commuters

Tram opponents often say that nobody will use the trams, and that Edinburgh doesn’t want them.

The latest survey (17 June) yet again shows the oppposite. The vast majority of workers at Scottish Gas HQ and students at Telford would use the trams to get to work, with the majority of them currently getting to work/college by car.

The full story is on the BBC.

This goes to show why trams are crucial to the Waterfront Development, and with bus journeys to Granton from the City Centre and beyond sometimes taking nearly an hour, it shows that people will use a tram when they wouldn’t use a bus! 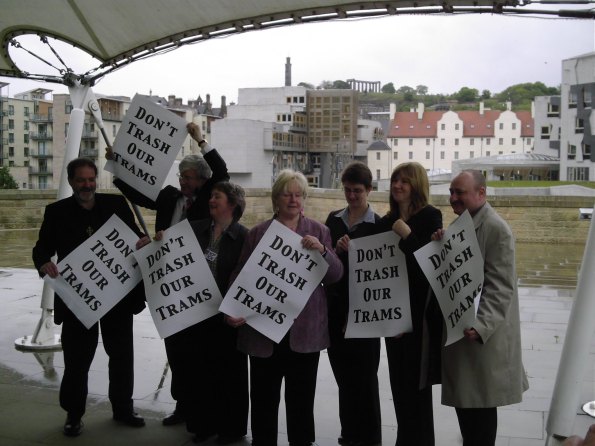 We need a referendum on trams – NO, we just had an election.

We have just had an election at which most people in Edinburgh voted for parties that support trams.

Each pro-tram party put their support for trams at the heart of their manifestoes. It wasn’t tucked away on page 99. Everybody had the chance to vote on trams. Here are the results:

Before the election, leading tram supporters and opponents called for the election on May 3rd to be a tram referendum.

Labour said to treat the election as a referendum on trams.

Tina Woolnough, the leading anti-tram protester (who was standing as an Independent for the council, and lost) wrote to the Evening News saying the elections were the only referendum we would have.

They were. The result of that was resounding.

We do not need a referendum because, unlike for congestion charging, there is near-unanimous cross-party support for their re-introduction. They have the practically-unanimous support of the business, academic, transport, and environment sectors. There is nothing controversial about the trams.